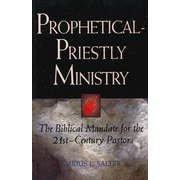 It’s fascinating how things fall into your lap when you least expect them. Serendipity is the word often used to describe favorable circumstances like this when you discover something grand has come your way unexpectedly. Christian sagacity trends not towards luck though, but instead, toward an understanding of the work of the Father and Spirit in concert. Salter’s book landing in my hands was just such an event.

Prophetical-Priestly Ministry was published in 2002 to little fanfare. A quick search for reviews of the book comes up short; it is ignored on Amazon and the single entry at ChristianBook.com is a restatement of the title. The silence is understandable. The book is not about how to grow your church, new ways of reaching post-moderns, or new secrets of the life of Jesus. These books fly off the shelves into pastoral libraries. Books that serve as correctives such as this are often ignored. And I believe, ignored at the peril of the pastor and their church.

Salter’s message to pastors is simple: return to your core responsibilities. Speak the prophetic word of God into the lives of your congregation rather than feeding them messages about how to have their ‘best life now.’ Stand as the priest for God’s people rather than their cheerleader or worse, their manager. He says “Prophet-priests specialize in diseases of the soul; sin, despair, depression, loneliness, alienation, anger, hostility, pride, greed, avarice, addiction and fear. The list is almost endless. Of course, these sicknesses eventuate in the systemic evils of ethnocentricity, nationalism, exploitation, oppression, and racism.” The message in this thin volume calls us back to the service of the congregation and gets us away from parading around selling books or conducting seminars on how to fill more seats in the sanctuary.

The author critiques the current ‘worldly’ ministry that he sees all around the American landscape (in 2002 and worsening since). The Church has gotten entrapped in the self-fulfillment culture and, in some cases, has moved away her first love. God is a second thought in the worst of these environments. The ministry has become enablers. We promise spirituality while allowing our people to remain in their materialistic, pluralistic lifestyle. The gospel becomes a casualty of the latest charity initiative or small group study topic.

I didn’t go looking for this book. It appeared in a weekly-specials email and something moved me to purchase it. Initially, it arrived and made its way to the book shelves to be read later. I picked it up after a time and was immediately struck by the message that the Spirit brought to bear through Brother Salter’s words. I was stopped cold when the Spirit brought my feeble ministry efforts up against those of Francis Asbury,

For the elect’s sake, Asbury ceaselessly uttered the Word through Scripture reading, prayer, exhortation, teaching, and family worship. Every overnight stay would involve spiritual examination of the residents and subsequent catechism. There would be no idle words. “My mind was powerfully struck with a sense of the great duty of preaching in all companies, of always speaking boldly and freely for God as if in the pulpit.” This included calling “the family into the room and addressing this pointedly one by one concerning their souls.”

One by one; when was the last time you (or I) sat even our immediate families down and questioned them concerning their spiritual welfare? Have we gone home by home and addressed these concerns with our faith families? Why not? Because we have succumbed to the Western individuality of the culture and we respect the personal nature of a person’s faith more than we do the calling we have received to be a priest and prophet.

Brothers and sisters, now is the time for a new awakening within the Church. Not the watered down awakening of “spirituality” in its myriad forms but for us to stand upon the walls ahead of our flock, intervening for them with God and speaking His word into their lives not matter how difficult. Find this book, read it, absorb it, and let the Spirit work it all out in your ministry.