In expressing his moral shock at God’s decision to destroy the good with the bad in Sodom, Abraham voiced what many believers have wanted to yell throughout history, “Will not the Judge of all the earth do right?” Indeed! The slaughter of the righteous and the wicked and the continued prospering of the wicked so many centuries later perplexes us. Some, believers and non, are tempted to the point of labeling God unjust based on what they see around them.

There are numerous warnings in the Bible that turn people away succumbing to this belief. Over and over, the Holy Spirit inspires the authors to record prohibitions against belief that the current reign of the unjust will continue forever. God will mete out justice at an appointed day in the future; “..do you think you will escape God’s judgment? Or do you show contempt for the riches of his kindness, forbearance and patience, not realizing that God’s kindness is intended to lead you to repentance?” (Rom 2:3b-4; see also Acts 17:30-31, 2 Pet 3:3-9)

The more observant will note the theodicy evident in the Cross. The clear language Paul uses in Romans 3:21 – 26 forms the foundation of this understanding. God present him as a sacrifice of atonement, through faith in his blood. He did this to demonstrate his justice, because in his forbearance he had left the sins committed beforehand unpunished-he did it to demonstrate his justice at the present time, so as to be just and the one who justifies the man who has faith in justice.

Divine Justice is on full display. God judges sin, requiring the ultimate penalty in death. He also extends mercy to sinners, paying this ultimate price himself. As Stott says “For now, as a result of the propitiatory death of his Son, God can be “just and the justifier” of those who believe in him.” His justice is defended against the limited understanding of man and the questions that pour forth from it.

Grace and peace to you.. 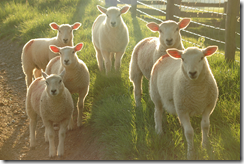 For God was pleased to have all his fullness dwell in him, and through him to reconcile to himself all things, whether things on earth or things in heaven, by making peace through his blood, shed on the cross.

To reconcile one to another means that there was a preexisting relationship to be breeched.

So removed from the falter in the Garden are we that more often than not forget to reflect upon the original design for relationship between God and humanity. We were created for constant communion with the Creator, the introduction of sin building the un-crossable chasm between us. As Christ became sin to atone for the intergenerational sin, He also become the bridge that renewed the possibility for the repair of the rift. 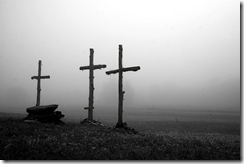 Often seen only as a season of remembrance meant to enhance the meaning of Easter, Lent is also a time of association. Many vicariously associate their voluntary deprivation with the suffering of the Lord, but it need not stop there. One of the primary areas of investigation has to do with answering the question, why did Jesus die?

Some will answer quickly that He died at the hands of murders. Pilate, the Jewish authorities, the Roman soldiers who perform the act are all culpable. The soldiers are certainly not innocent but cannot be said to be guilty, since after all, they were just following orders and to disobey would have meant their own demise. Pilate bears a bit more of the guilt, though his feeble attempts to disavow any guilt by washing his bloodied hands attempt to point the accusations elsewhere. The Jewish leaders who initiated the process through their false accusations and provacative claims? They wear a bit more of Christ’s blood on their hands as it was their threatened egos that propelled him on the way to His death.

You and I are guilty as well.

We have the same desire to “get rid” of Jesus today as he interferes with out desire to exercise Lordship over our own lives. He intrudes at the most inopportune times and demands that we give Him worship we would rather slavish on ourselves. He is as much a rival to our Ego today as He was to the insecure leaders of the first century. Stott puts it this way, “There is blood on our hands. Before we can begin to see the cross as something done for us (leading us to faith and worship), we have to see it as something done by us (leading us to repentance).”

Grace and peace from the One who is over all and through all and in all.

Unlike the anticipation of the Advent season where the focus is on new birth and the manger, Lent leads our thoughts inexorably to the cross. The crucifix often becomes invisible to us when we see jewelry and other decorations fashioned in the cruciform shape. We take for granted that it is situated in a prominent place in our sanctuaries and often fail to register its significance as our eyes survey the space on Sunday mornings. A visitor to one of the grand cathedrals of historic Christianity would be confronted the cross adorning everything at every turn but left to wonder, why the cross? Why has the Savior’s death furnishing become symbolic of the faith of hope?

The answer to this question is simple..and complex. The death of Jesus Christ and His subsequent resurrection are the key elements of the gospel; without them one came preaching good news but left us wondering. Escaping the confinement of the tomb on that first Easter morning dismissed all doubt. Sin had extracted a terrible toll but hope brought a new radiance as the living Savior showed himself having overcome the greatest fear of humanity, death.

Reflecting on the empty cross reminds us of both the cost of redemption and the hope brought about by not having to face the debt ourselves. We have about six weeks in which to prepare ourselves spiritually for the celebration of the resurrected Christ. We will keep the cross in front of us and reflect on it in depth so that when the beauty of the draped cross confronts us on Easter morning we will never again be tempted to take it for granted.

Grace and peace from the One who is over all and through all and in all.