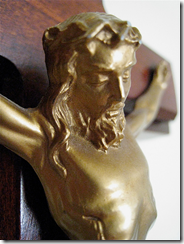 “But how can a mortal be righteous before God?” Job 9:2

“The atonement is the crucial doctrine of the faith. Unless we are right here it matters little, or so it seems to me, what we are like elsewhere.” Leon Morris The Cross in the New Testament

For many, bringing up the doctrine of atonement leads to a discussion of whether or not its scope is limited or unlimited. Atonement as a theological topic often ends there, though occasionally the mention of alternative view leads to a vehement exhortation that penal substitution is the only acceptable view on the matter. For something so critical to the Christian life, there is scant consideration of the depth and breadth of views on how and why Christ performed this sacrificial task on our behalf.

My next set of doctrinal posts are going to explore the wide range of views that the Church has held at various times in its history on the doctrine of atonement. Many people will discover that there numerous ways that Christians have understood atonement beyond the most commonly expressed view of Evangelicals, penal substitution. It is important to keep in mind that the various emphases and approaches to understanding atonement may differ on their constructions they all come to the same conclusion: the work of Jesus Christ on the cross reconciled a sinful people and a holy God.

Atonement, in all of its theories and views, is specifically the reconciliation with God over the problem of sin. 1 John 2:1-2 summarize the idea well:

My dear children, I write this to you so that you will not sin. But if anybody does sin, we have one who speaks to the Father in our defense—Jesus Christ, the Righteous One. He is the atoning sacrifice for our sins, and not only for ours but also for﻿ the sins of the whole world.

As reconciled people we are at peace with God rather than continuing to be His enemies. Christ’s death has removed the enmity between us and has appeased the wrath of God. The propitiation full satisfied every one of the righteous demands of God, a necessary transaction as His holiness does not allow God to simply overlook our sin. As redeemed humans, Christ has purchased us out of bondage to sin and we become His servants. His sacrifice was the act that allowed us to be declared righteous, pardoning us and ending our separation from God. As John Wesley wrote, “Nothing in the Christian system is of greater consequence than the doctrine of atonement.”

“’Father Abraham, have pity on me and send Lazarus to dip the tip of his finger in water and cool my tongue, because I am in agony in this fire.” (Luke 16:24)

There is a difficult tension that many believers confront when the doctrine of eternal punitive condemnation in Hell is contrasted to the pure love and holiness of God. How could a God of such love and mercy create such a place as the torturous horror of the chambers of Hell? Not only that, how would he condemn his creations to this painful punishment forever? In the course of answering these questions and responding to a call for the reconsideration of the doctrine of Hell, the concept of Annihilationism has been created. This school of thought believes that although not everyone will be saved (cf: universalism), those who are not saved will not face unending punishment. Instead, those not saved will simply cease to exist; they will be destroyed or annihilated. The core belief that supports this modified doctrine is that no one, regardless of the enormity of their sin, deserves eternal suffering.

A form of annihilationism known as conditional immortality states that the human being in his nature is mortal. Those who die unredeemed will be allowed by God to pass out of existence while the believer is granted immortality so that they survive death. A more developed form of this doctrine sees the unredeemed participating in the resurrection but that they will again pass out of existence while the saved enjoy the new heavens and new earth. Another form of annihilation envisions a period of punishment but that it is not eternal. After some measure of time has passed, perhaps in proportion to the sinfulness of the person, the soul finally ceases to exist.

The difficulty with annihilation is that there is little direct support in the Scriptures for the doctrine. The typical annihilationist reads the passages that refer to the final states, specifically those referring to destruction, literally. For example, Matthew 7:13 says:

“Enter through the narrow gate. For wide is the gate and broad is the road that leads to destruction, and many enter through it.

The word destruction is interpreted literally as matter being destroyed, fulfilling the annihilationist’s view of the end state. The Greek word apoleian does not support this literal interpretation but English readers have continued to do so. The annihilationist must also explain the number of passages that support the eternal measure of perdition. Many complex scriptural structures have been constructed to perform this task but the majority of the Church has not been convinced.

Tolerance has become the most important measure of one’s character in our modern era. Modern tolerance is not simple endurance; it is the required subversion of your beliefs and moral standards whenever they appear to impinge upon the beliefs and morals of another. In the era of the “Me” god there is no greater offense than to stand firm on a position, especially one rooted in traditional Christian belief, and deign to judge the beliefs and practices of another person and the truthfulness of their claims.

In The Disappearance of God, Dr. Al Mohler laments the way in which a culture that is enamored of this new tolerance has made inroads into the Church. As the Church has capitulated to the demands for her doctrine and moral requirements to be softened, Mohler effectively makes the case that cancer has begun to eat away at the very things that were meant to set Christians apart in the world. Worse yet, he says, the loss of muscle threatens the gospel as a viable message in the culture, rendering it as nothing more than a truth among other truths.

Dr. Mohler does not simply issue a roll-call of various ills that have visited the Church and leave it at that. He calls for an immediate triage to stop the further decay within the body and to sort out the issues that must be addressed in order to restore the power of the gospel claims and the power of the Body of Christ to once again affect the surrounding culture rather than continued to be diminished by it. In order of priority, the church must first regain a sense of which doctrinal issues are of primary importance to the restoration of authenticity within the Church and second, the members of the body must regain the intellectual strength necessary to engage in this discussion and fight to restore the authentic doctrine.

The book addresses a variety of gospel-weakening issues that have infiltrated the Church and which have varying abilities to permanently disfigure the face that She presents to the world. Mohler points to the loss of the notion of sin and the softening of the modern Church’s doctrine of Hell and eternal perdition as two of the fundamental positions on which leaders and their congregations must regain their footing. Certainly, both of these doctrines are contrary to the prevailing culture and a strong affirmation makes the Church less palatable in a tolerance-driven society. He challenges our desire to be loved by the world which leads us to put these difficult challenges aside and to restore our understanding of who we belong to and His demands of us.

The Emerging Church and their doctrinal slide towards extreme liberalism are also subjected to Mohler’s critique. While the Emergent movement was ignited by a desire to better conform the Church to modern cultural expectations, that formation allowed postmodern notions of truth to color their doctrinal positions as well. Mohler critiques the doctrinal development of Emergent thinker and leader Brian McLaren as representative of much of the whole. McLaren’s definition of generous orthodoxy as wide ranging and allowing for an unlimited spectrum of philosophies fails to address the opposite side of his arguments in that this spectrum essentially denies the existence of absolute truths.

Dr. Mohler has produced another outstanding polemic against the further decay within Christ’s Church. He encourages the reader on page after page to recognize the doctrinal malleability that we have allowed to creep into the Body and affect our witness to the world. Aligned with his early call to develop our own theological muscles, Dr. Mohler doesn’t provide the answers to challenges he issues. He provides a succinct classification of the problems, now it’s up to you and I to follow through and get the Church back on track. The first step is a thorough read of this book.