Then Jesus came to them and said, “All authority in heaven and on earth has been given to me. Therefore go and make disciples of all nations, baptizing them in the name of the Father and of the Son and of the Holy Spirit, and teaching them to obey everything I have commanded you. And surely I am with you always, to the very end of the age.” Matthew 28:18-20

With this commission our Lord instituted the rite of baptism as practiced by the Church since. In the centuries that have passed, the Church has interpreted the rite’s meaning, effect and administration in myriad ways. It has provided moments of unmatched joy for participants and their beloved, and it has also evoked bitter division within the Body.

Christian discuss and divide over the mode and meaning of baptism, over who the appropriate subjects of the rite are and even what the effect of the baptism is. Catholic theology insists that the rite of baptism causes regeneration, making it a necessity for salvation. The Reformation division is rooted in these sacramental ideas and insistence that salvation is by faith alone. Therefore, the predominant belief in the Protestant church is that the rite is symbolic in nature and that it is practiced out of obedience to the command of the Lord.

Understanding the practice of baptism requires careful research and exegesis. Other than the command to practice the ordinance, there are no explicit instructions for administration, purpose or effect in the New Testament. The doctrine of a church is therefore devised from existing belief, historical practice and what can be understood in the text. Understanding this, baptism should be looked at as a non-critical doctrine and one that should not be a cause of division, though it remains so.

A series of posts will follow this in the coming weeks. The first will explore the predominant Protestant position of a believer’s only baptism, administered by immersion. A word study of Baptizo is a necessary component for understanding the practice of immersion versus affussion, and that will follow these initial posts. We will then explore infant baptism and the theology behind that doctrine. The objective of these posts is not to advocate for a single position but to explore and discuss the theology behind a doctrine that we often take for granted. I’ll look forward to interacting with readers on this topic.

Grace and peace to you.. 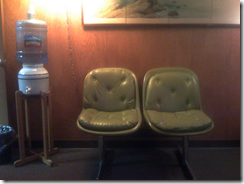 The idea of Purgatory is the last of the major doctrinal positions that Christians hold on Hell and the final things. It is almost exclusively held by the Roman Catholic church with very few Protestant theologians finding the position credible. Purgatory refers to a state or condition where souls come to rest between the final destinations of Heaven and Hell. The soul in purgatory endures a purifying suffering necessary to prepare them for the final judgment. After that day, according the the Catholic theology, Purgatory will cease to exist as its mission will be fulfilled.

The idea of an interim state is not unusual in general Christian theology. It answers the question, “what happens when we die?” The popular idea of immediate ascent or descent does not take into account the scriptural references to a day of final judgment in the future in which some are assigned to perdition and others to glory. Purgatory is the Catholic attempt to explain this state, expanded to include the notion of purification.

The symbolism of purgation is not rooted in Christianity but is widespread throughout all religious history. It is bound up in the distance of holiness between gods and men and in the human desire to approach the gods. The perfection of the gods requires that the human affect some measure of holiness themselves in order to stand in the god’s presence. The holiness is gained by a purifying ritual that takes many forms. As it was adopted in Catholic theology, this purifying process included a measure of punishment for the sinner according to their faults in their earthly life. The punishment is sped along by the mortal intercession of the Church and the sinner’s survivors. Catholics understand human nature as not perfect but not perfectly horrible either. Purgatory grants them an extension on their ability to be perfected for the next phase of eternal life.

What do the scriptures say about Purgatory? Very little if anything at all but we need to understand the Roman Catholic approach to the scriptures and theology in order to understand the formulation of the doctrine. In the Apocryphal book, 2 Maccabees contains a passage that supported the historical development of the doctrine. In the context of the text, some of the soldiers of Judas Maccabeus were wearing idolatrous amulets when they were killed in battle. Judas took up a collection as an expiatory sacrifice intended to release the dead from their sin.

They all therefore praised the ways of the Lord, the just judge who brings to light the things that are hidden.

Turning to supplication, they prayed that the sinful deed might be fully blotted out. The noble Judas warned the soldiers to keep themselves free from sin, for they had seen with their own eyes what had happened because of the sin of those who had fallen. He then took up a collection among all his soldiers, amounting to two thousand silver drachmas, which he sent to Jerusalem to provide for an expiatory sacrifice. In doing this he acted in a very excellent and noble way, inasmuch as he had the resurrection of the dead in view; for if he were not expecting the fallen to rise again, it would have been useless and foolish to pray for them in death. But if he did this with a view to the splendid reward that awaits those who had gone to rest in godliness, it was a holy and pious thought. Thus he made atonement for the dead that they might be freed from this sin. (2 Maccabees 12:41-46)

In the New Testament, some will read in Matthew a similar reference:

The Catholic reading of this passage points to the possibility of being forgiven in the next world. Protestant theologians (cf Eph 1:21) do not generally share this reading. Catholic theologians will admit that the scripture is ambiguous at best and will also readily state that the doctrine is rooted in tradition rather than sola scriptura. Tradition will cause the Catholic reader to understand these and other passages in the light of the Roman Catholic theology of grace and works.

For the Roman Catholic, purgatory is a final opportunity in death to find our love for God. It is a state of His continuing grace and mercy to continue to seek a way in which the human might be restored to holiness and finally to God’s presence. Mortal intercession can aid those who find themselves suffering in a purification process until the day of judgment when Heaven or Hell will be the only choices remaining.