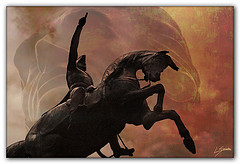 A.W. Tozer wrote this about worship and the fact that we were created for that purpose: “If we do not honor this purpose our lives will degenerate into shallow, selfish, humanistic pursuits.” Oh, the prescience of brother Tozer.

One of the components of paradise was perfect worship. Before humankind elected to rebel against their Creator, they enjoyed perfect communion with God. They understood Him and were able to communicate directly with Him. They were in the perfect environment  and were able to live out the purpose for which they were created, worshipping God. None of the concerns that plague us today were present. Worship was uninhibited, unlimited, untimed, uninterrupted and the participants were unafraid and unblemished.

And then the wars came.

The theological history of worship begins long before Creation, in the heavens. More than our mundane battles over music style, instrumentation or volume, the wars began to be waged over the object of worship. The first worship battle was sparked by Lucifer, the Star of the Morning, being cast out of the presence of God. The Cherubim to which all others aspired desired for worship to be directed to Him rather than its proper object. God, whose name is Jealous, would not abide with this shared arrangement and the wars began.

Coming in the form of a serpent, a creature over which Man had dominion, Satan slithered into the second battle to interrupt the perfect communion of the Garden. A subtle twisting of the words of God bewitched and betrayed the inhabitants of the garden. Putting themselves above the place of God, they’re minds were opened to the worship of self. Redemptive history begins.

The first casualty of the second offensive was Abel. Differences in worship style start here even though God gives every opportunity for propriety in worship to be restored. Rather than do so, Cain becomes the first to divide fellowship with other men over the way in he decides to worship. Rather than seeking God’s desire for worship, the long, sad history of church division get’s its introduction here.

Grace and peace to you…