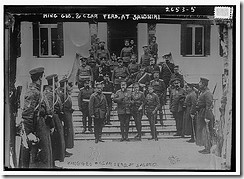 Break the teeth in their mouths, O God; tear out, O Lord, the fangs of the lions!

let them vanish like water that flows away; when they draw the bow, let their arrows be blunted.

Like a slug melting away as it moves along, like a stillborn child, may they not see the sun. (vv 6-8)

The Bible is no stranger to violence whether it be retribution against sin-stained men by God or the broken interactions between men. Many are critical of Christianity and use the violence as proof that their is either no God, or that God cannot be as holy as He is made out to be since He is associated with various violent acts. The psalms do not escape this history and in certain passages, the imprecation of the prayer against his enemies places us in an odd position. The Christian is challenged to justify words such as these in the light of the Beatitudes  or the admonition to put away thoughts of an eye for an eye (Mt 5:38-42).

We must be cautious in our approach to these psalms and not confuse the violent fantasies of the author with the righteous actions of God. In order to show the depravation against which he rails, David attempts to portray a similar level of violence in judgment to that which is being measured out by the unrighteous rulers. Though they may have personally injured David, he is not seeking to justify a personal vendetta. Rather, he is seeking only to restore righteousness to the land and the hyper-violence he portrays is to serve as a warning to the wicked of their coming judgment which he entrusts to God alone.

The righteous will be glad when they are avenged, whey they bathe their feet in the blood of the wicked.

Then men will say, “Surely the righteous still are rewarded; surely there is a God who judges the earth. (vv 10-11)

This psalm is about trust, trust that God will see to it that righteousness prevails. The imagery that David utilizes affects our sensitivities differently than it may have to original listeners. He seeks in all of the warning and cries for justice not to destroy the unrighteous but instead, to render them impotent. To break out the teeth of the ravenous beast is to release its prey from certain destruction. To watch watch water evaporate harmlessly is to prove the ultimate fate of evil while their blunted attacks bounce harmlessly to the ground. Perhaps, as David voices, it would be better for the wicked had they never been born.