If you have been following this series on Scot McKnight’s book The Blue Parakeet or just read the book, you will have arrived at the self-analytical conclusion that you and I don’t do everything the Bible says to do. We don’t do this out of any lack of love for God or simple disobedience, rather, we have read, analyzed, and in light of the traditions that surround us, we have decided which of the hundreds of commands apply to us and which were intended for application in another era. This is the practice of discernment.

Discernment answers the question, why do I not do what the Bible teaches? Each of us within the context of our church community and tradition approaches the answer to this question in different ways. We take God’s word in the light of the Spirit and the context of our immediate community and we hear Him speak to us in our way in our day. The conclusions that we reach and the way that we apply those conclusions reflect the best way in which we understand that God wants us to live out the gospel in our moment. There are dangers associated with this that become evident in practice. Cultic or abhorrent practices can result from individual discernment that does not take into consideration the long held traditions and beliefs that have guided the Church for centuries and that result in ‘new revelations’ counter-cultural to the Church as a whole.

Discernment is a messy process. Many modern controversies demand that we return again and again to the Bible and then prayerfully seek the Spirit’s guidance in how to understand and apply the truths that we find there. The church will decide countless matters that have profound effect on the life of the community. For example, will women preach and teach on Sunday and how will gay and lesbian followers participate in the life of the body. The remaining chapters of Blue Parakeet will address on particularly contentious issue within the body, women’s place in the ministry of the church but the pattern of discernment that McKnight highlights are applicable to numerous other issues. Let’s take a look at one, glossalalia. 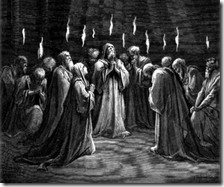 What facts can we begin our examination with? The early Christians spoke in tongues (Acts 2), Paul spoke in tongues quite a bit (1 Cor 14:18) and Christians throughout history  have received the gift of tongues. BUT, because the gift and practice have been limited in their scope to some smaller pockets of the body, a pattern of discernment arose that said that tongues are not for today, they were a sign gift for the first century alone. In spite of this, the Pentecostal movement of the early twentieth century, the charismatic believers and even the Vineyard churches have demonstrated a different pattern of discernment than the rest of the Church saying, ‘that was for then and it is also for now.’

Some with a narrow pattern of discernment will challenge this understanding and yet, the evidence of this practice is difficult to dispute. Is there something in our immediate context that forms our pattern of discernment such that we are unable to accept a truth that others have embraced? McKnight suggests in this example that those who grow up in a body where speaking in tongues is accepted are more likely to receive the gift while others with less experience continue to view it as foreign. Our context affects our interpretation and our discernment and because we have numerous unique traditions and practices to which we have become accustomed we should be cognizant of this fact, not only for ourselves but for understanding others as well.