The legendary Mavis Staples has treated us, just a couple of weeks ago, to a new album recalling the civil rights struggle that continues to this day in some quarters. We’ll Never Turn Back is equal part traditional spiritual and modern protest lyric, all of 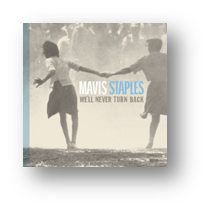 it driven by the deep soul-shaking voice of the soul and gospel marvel. After one listen you will be lost in her storytelling, singing that takes you back to the battle lines of the sixties and then carries you forward to the aftermath of Katrina. On the hundredth listen you will remain captivated by the strength of her voice, layered as it is over a perfectly stripped down backing band that includes Ry Cooder, drummer Jim Keltner, hip hop producer Mike Elizondo on bass and backing vocals provided by Ladysmith Black Mambazo and The Freedom Singers. This is a CD that will not leave your player for some time.

Every song on this album is a masterpiece on its own but the traditionals stand out. Mavis sings over the most austere of background music, eliciting an image of the small church gathered to raise their voices in praise. We Shall Not Be Moved and This Little Light of Mine take you to another place and remind you that there is much work to be done. Go now and buy this record. Then lock the doors, open the windows and turn up the volume. Never mind the neighbors, they can sing along as well.

One thought on “Mavis Staples Continues the Fight”